In this exercise we create two poems with the material from one, learn how chance methods can enhance and inform our work, give us a better sense of how to break a line, if we don’t already know and provide another tool for organic composition. One of the most fascinating poets of the 2nd wave of the is Ted Berrigan (1934 – 1983). Berrigan hung out with the painters of the in the early 1960’s and was inspired by their collage method. His epic The Sonnets recycled old lines of his and repeated many lines and images. A friend of Frank O’Hara, he often used O’Hara’s I did this and I did that method of writing. Pop culture, music and other art references inform the poems, as does Whitehead’s Philosophy of Organism. In the 2000 Penguin Poets edition of the book, his widow, Alice Notley, writes:

There is a key line that occurs only once, in Sonnet L: “Whatever is going to happen is already happening.” It refers to Whitehead’s theory of time and states quite plainly how The Sonnets works, how events are forecast and then ripen, staying on as echoes, or as something built-in, through the use of repetition of lines. The line became sort of a motto of Ted’s later in life, since it also means “If you aren’t doing it now you won’t ever do it.” … Whitehead writes: “In organic philosophy the notion of repetition is fundamental.”

Here is how Berrigan used a particular collage technique in The Sonnets:

2.      does not point to William Carlos Williams.

7.      I am truly horribly upset because Marilyn

10.    Diary. The black heart beside the fifteen pieces

7.  I am truly horribly upset because Marilyn

9.  and ate King Kong popcorn,” he wrote in his

11. of glass in Joe Brainard’s collage

12. takes the eyes away from the gray words,

10. Diary. The black heart beside the fifteen pieces

4.   What is in it is sixteen ripped pictures

2.   does not point to William Carlos Williams.

Notice the thrill of surprise mind (Ginsberg’s phrase) when we get the image of the narrator being washed by Joe’s throbbing hands. A love of literature, references to pop culture, a playful irreverence and a sense of being in the present moment informs this sonnet and the entire series, but I’d suggest it’s Berrigan’s talent combined with Whiteheadian reality that’s the key to its success.

To create a poem (two poems) like this, you start with going through your old notes, or old poems, or just use your memory. You can even take lines from other poets, but you may want to italicize those. Robin Blaser uses other writings extensively, but rarely cites his sources. He DOES italicize those stolen lines. Be sure to include many imagistic ones that encapsulate an image or perception in one line. Just write the poem first, going on your nerve, then do the collage, but keep the lines tight. Four to five feet is perfect. Sometimes Berrigan got away with longer lines. Here’s how I split up one of the collaged sonnets from my Tuscan Sonnet Ring:

2.     of Spring Herring chewing on pasta

5.    I had only with the pepperoncini

1. Drunk on a accent he speaks

5. I had only the pepperoncini

9. for he is alive at five hundred

11. and the sky remains biblical

15. in the tunnel near the Fortezza

17. though thunder etches the air

18. above the Tuscan night.

16. and yet not one Grappa ambulance

14. or thunder of scooters

8.  no other sculpture after this

4.  gulping down the same dish

2.  of Spring Herring chewing on pasta.

So you write the poem, using an opening image or phrase to get you going. Like anytime you are writing organically, you can use the alluvial method when you get stuck, or you can pop in an old line, or a stolen one. Once the poem is finished (and you should be able to use the shorter length of the poem to help you feel the end) you can collage the poem, making two. You may want to have the collaged version appear first, or not. See what interesting connections, or shifts in meaning, are suggested by the new arrangement of lines. Collage can be disjointed, but in a longer series (Berrigan had 88 sonnets) the repetition can aid the enjoyment of those who are addicted to reason and meaning, (not that you’d want to write for THEM anyway.) 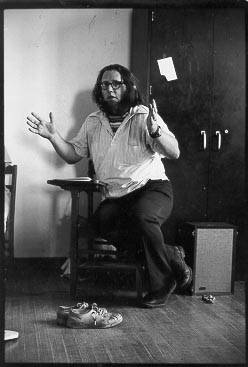